B equals to "Let B is a string that begins with 1 and, after, contains at least another 1". 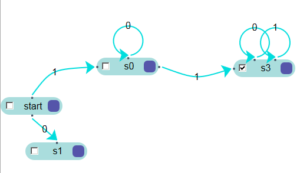 This DFA doesn't "count" the number of 1s

As shown in 1.77 Sipser's example, we can apply an absurd proof of the pumping lemma to this language

Let we assume that B is regular. Let we choose one 1 as pumping's y and the second part (i.e. from the first 0 found) as pumping's z, and it seems to work:

Pumping lemma doesn't allows a length of 0 for the y part, but allows that y is repeated zero times.

Using as example the previous string, with y repeated zero times, we obtain the string 0100, that doesn't match. Thus we obtain a contradiction.